Following the fifth stage of Belarus Poker Tour which has started in Minsk, one of the main events of Russian Poker Tour is also going to have a going here. If everything goes well (and we truly believe everything’s going to be that way), Minsk is going to be assigned to a new status of poker oasis of CIS.

Recently discovered flaws of Live Events series is putting in doubt some words and actions of some tournament directors who used to have crystal reputation in poker community not causing any reproaches.

In particular, reputation of Mike Peltekci took a blow. He was not just the head of Live Events, but directed some other poker tours that were popular in CIS.

This isn’t the worst news. The most hurting events have happened in Kiev last year, when the capital of the country (and the country itself) stopped being the center of the poker life. We won’t split in hairs, you probably do remember this.

Let’s give you some facts. Starting 2010 until the end of 2013 stages of Russian Poker Tour almost exclusively went in the Ukraine. In 2014 RPT started to go abroad, this year Minsk showed up on the map once again. The city is beloved by many regulars and poker amateurs.

From September, 7th to 15th the fifth stage of Belarus Poker Tour is going to be held in Minsk. The championship of Belarus is a good build-up for a major stage of RPT. However, BPT also grows: Main Event in July had over 260 people; the series grows experience, it has recently become a ten-day event, more comfortable for the players.

And there is no better place like Belarus to have the poker capital. One of the best nations in poker has serious representatives in all poker spheres, including the highest stakes online (cash and MTT). Even if we look at some kinds of unusual formats like SNG with $5,000 buy-in, we’re going to see Belarusian flag also (we’re talking about Nikita “fish2013” Bodyakovskiy). Hendon Mob database has more than 430 Belarusian players who have participated in more or less famous live tournaments. But according to unofficial data, about 50,000 poker enthusiasts live in the country. That is for the country with the population of 9.5 million people!

In the second half of September, right after the finish of BPT 5, Minsk is going to host a big stage of RPT, the most exciting poker event of the year in CIS.

Expected prize fund for the upcoming event is around $1.5 million. The big sum for RPT and Belarus in whole. 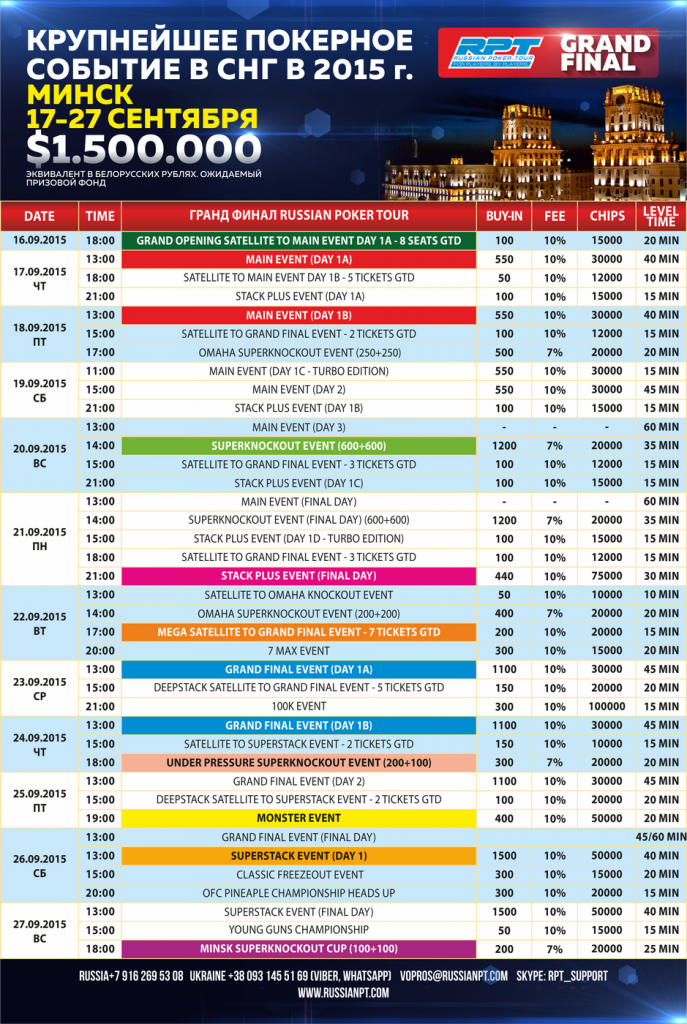 The schedule has certain surprises. For example, $300 100K EVENT: starting stack of 100,000 chips, levels of 15 minutes, action is guaranteed. Moreover, the organizers will take care of MTT regulars who participate in WCOOP 2015, World Championship of online poker. They will have fast and reliable internet connection.

So what do we have? While poker in Russia and Ukraine is somewhere in the deep corner and shows up from there very seldom, Belarus has suddenly bettered in the eyes of poker players. Minsk has its own disadvantages but the conditions for organizing of the biggest poker events in CIS are great here.

There are more than ten poker clubs in Minsk only, including Zeus Poker Club, Casino Emir.