Getting to know math helps a lot with having a winning game. One is able to be free from working with poker calculators and get nothing in hand ranges, but he can’t deny the fact that basics of poker math are a must-know. Variance is one of the fundamentals of game theory.What is it, how to count it, who managed to fool the variance, who failed with that task, some advice on decreasing variance impact – that is what we are going to speculate on right now.

In poker, just like in life, perception means a lot. Some players believe in luck and try to get it on their side at all the possible cost. The others believe in math and continue with their never-ending grind. In general, pros and amateurs are speaking of the same thing, but on different languages – and that thing is variance.

Variance is the deviation from of the real results from expected value in the long run.

For example, you have pocket aces. Having this starting hand, you will win against a random hand on 4 occasions out of 5. Accordingly, your expected value in this hand for 5 occasions is +4 buy-ins. Sometimes things would go wrong and you might lose all 5 all-ins. In that case, your real winnings are at -5 buy-ins. Such deviation from the real result and the expected value is called variance.

In other words, the variance is a good or a bad luck from the math standpoint. By calculating the variance you can see the real luck impact in a certain discipline. If in 15% of the cases you can’t win AA all-ins, you have to make that is some impact of variance. Those are the rules of the game.

How to calculate variance? We’ve calculated the variance of 100 Sunday Million tournaments for the players with ROI 15% in the long run. To win Sunday Millions is any online player’s dream. Looking at the prize money of $200,000 for the 1st place, cocky amateurs sign up for the main event on Sunday believing the luck will definitely be on their side. 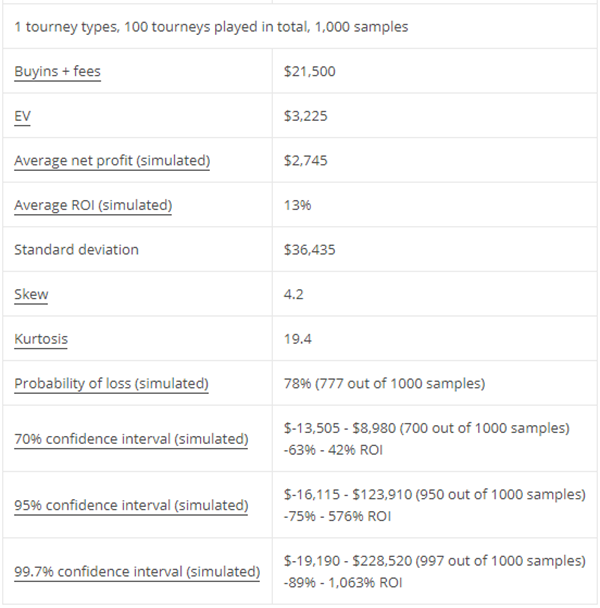 They fooled the variance

Just like with every rule, the variance has its exceptions. History knew the cases when players neglected the laws of variance and managed to win in “Veni. Vidi. Vici” style. Those stories with the guys who fooled variance aren’t rare for WSOP.

In 2017, one of the main protagonists of poker newsfeeds was James Moore. He managed to do something that many professional players failed to do. For the second year in a row, Jason Moore won in the same tournament - $1,000 Super Seniors Event. Back in 2016, this tournament had 1,476 participants, while in 2017 the number was at 1,720. Variance calculator shows that in 81% of the cases, James Moore had to lose it all. The same year another wonderful story took place. Shane Backwall after 24-hour flight signed up for his first WSOP Limit Hold’em tournament, outplayed 615 people and won a Golden bracelet and $178,000 in prize money. After the win, Shane told in an interview that he has no future plans to play poker and wants to dedicate his life to the cooking. That was some hit and run and World Series of Poker. These are two cases when the players managed to fool the variance. Oftentimes, fate has other ways, and even the best pros who are trying at WSOP do not get to final tables for years.

They didn’t fool the variance It is hard to imagine that Anatoly Filatov made it to the list of unlucky players. The online career of “NL_Profit” is doing very well: the total amount of prize money at all the poker rooms is close to $3,000,000. Things are not looking that great at World Series. Since 2012, Anatoly never missed a single WSOP. He plays tight at tens of tournaments every year. However, the best ITM of Anatoly is $28,389 (at $10,000 buy-in tournament). His closest run to the bracelet ended on 30th place (out of 1244 participants) in 2015. Variance in Vegas is not on Anatoly’s side.

How to decrease variance impact in poker?

Variance in poker isn’t either a good or a bad thing. It’s OK. It is a thing all players have to accept. In order for variance to not destroy your bankroll and don’t get too much of you in comparison with other players, there are several rules to follow for neglecting variance impact.

The first rule of a successful poker player is to keep up to bankroll management. Its essence is simple: a good player believes in his powers, skill, understands the variance factor and continues to play poker despite it has its impact. By participating in a huge number of tournaments, players try to get expected value from their game as all of them naturally believe that it is EV+. That is why many professional players, knowing their edge over the field continue to play at WSOP hoping that the variance will be on their side.

This is especially relevant for Spin&Go where the variance is extremely high. Its essence in uniting into the team where players have general bankroll and share their profits on chipEV. The goal of the pool is in playing max long distance hoping to get expected value from the game.

If you can’t deal with variance – avoid it. Pay attention to some other disciplines. Play cash and Sit&Go for 9 people or DoN tournaments. These tournaments have the lowest variance.

Variance is not the enemy.

You don’t have to look at the variance as at your enemy, or an obstacle on your way to Sunday Million win. Variance is something that spreads your edge in the long run, Thanks to variance you can see a housewife, a gardener or a pizza cook at the final tables on WSOP, EPT and other poker series. The variance makes poker an exciting and spectacular game.