When acrobatic tricks of Guy Laliberte (they made a real performance on the tournament opening), when the price of Monaco Albert II told his speech; when they all gathered in luxurious Casino de Monte-Carlo hall – the tournament with the most expensive buy-in in history of poker began.

The spectacle was extraordinary. Let us start with the participants list. Guy promised at least 35 people… and failed. 26 multi-millionaires and billionaires played in it with two more re-entry buy-ins. By the way, Laliberte himself and Andrew Pantling who played highest stakes online at ClockWyze nickname.

There were many names of people who played other super highroller events. For instance, Alfred Decarolis, Pal Phua, Rick Salomon, Paul Newey, David Einhorn, Haralabos Voulgaris, Dan Shak,  Talal Shakerchi and many others.All the above mentioned people went to the second day of competition  24 persons total. As Guy Laliberte claimed, participating was prohibited to professional players. Really, most of them were coaching and stayed on a short distance from their players. Laliberte hired Negreanu, Phua decided to take class from Daniel Cates, Daniel Shak partnered with Scott Seiver, Antonio Esfandiari took Bob Safari’s side and so on.

Real pros were among the participants of the event. For instance, Andrew Pantling. Now he is a head of his own company Matchbook (totalizator), but in 2010 and the following years he actively competed with Phil Ivey and other top regulars in Full Tilt poker room. HighstakesDB safely saved the profile of this player, which is really doesn’t show how high Pantling went. This person can certainly be not called an active professional but he is far beyond being an amateur. Same goes for Dan Shak and Talal Shakerchi. The latter actively plays online under raidalot nickname, and he won $10,000 SCOOP Main Event High ($1,468,000) in the May. In addition to that, Shakerchi is EPT champion. So, the second day of the tournament shortened the player’s pool to 8 players:

Aforementioned “semi-amateur” Pantling took the lead as the resting pro. Gurtovoy also comfortably went to the final day, having more than 40 big blinds.

Paul Phua shined in the beginning of the second playing day. He eliminated four (!) players, including Guy Laliberte. 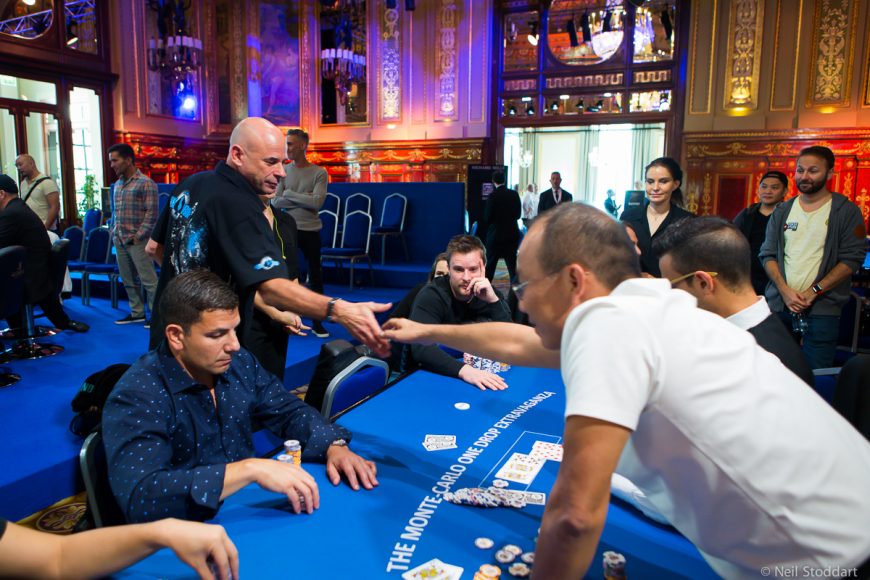 In one of deciding hands of the whole tournament on the turn of the board J-9-2-8 Bob Safari and Andrew Pantling went all-in. The first one had nuts (Q-10), and the second was dreaming on catching one of the outs, having two pairs (9-8)… River was another 8, that caused traditional Esfandiari’s reaction: “Sick”.

After that, the stack of Pantling reached incredible sizes and that allowed him took the lead in chip count.

The final playing day started with Tsang-Pantling battles. The latter lost most of his stackin couple of hands and crowned a new chip leader and future champion. Second of their hands had over 16 million chips in the pot preflop (4-bet pot)!

The flop was К-7-10 rainbow. Being an aggressor and having just 17 million chip stack, Pantling bet 6.5 million chips but after continuous thinking and sighs he had to fold his hand to Tsang’s push. Unfortunately, that was not the fight of equals. Tsang was unstoppable. He was put on a cruel cooler in the last hand. Q-3-4-2 board, Gurtovoy pushes with made straight (A-5), but his opponent had a better straight (6-5)… All the poker clubs in Monaco

All the poker clubs in Russia