Should one eliminate respect from poker – there will be only market relations. Soulless chips trade, pure competition with no conscience involved. Limit Hold’em is pretty close to that. It is quite regular to use sitting scripts at top stakes for a long time. There are also various forms of angle shooting in practice. Russian top regular Feruell is accused of heavy buttoning and he admits it.

“King of Limit” Feruell, one of the most famous Russian regulars, was banned at PokerStars in July 2013 for buttoning (avoiding posting blinds).

Stars sent Feruell a warning – should he continue breaking the rules, he will imminently receive permanent ban. And so it happened. Elite regular with still secret name (what gives him some sort of being fantastic) can’t play in the biggest poker room on the planet:

“Well, I have my PokerStars account closed. Forever… I had a warning before that for some bullshit, I wrote about this on 2+2 with the text from PokerStars support. Now I have permanent ban.”

Despite all the irreversibility and strictness of punishment, Feruell got his right to play at PokerStars back. Looks like he found “the right words” in conversation with the security department.

And now we have this thread in the end of March 2016 where the mysterious player gets old accusations in the other room.

“I’d like to talk to all the players at 888 poker. I’ve noticed that all-known feruell (ThrCnBeOnly1 on 888 poker) avoids posting blinds.

There is an amateur player (bargeman456) who buys in for 5 BB and goes sit out for a couple of minutes a lot and jumps from table to table. Therefore, there are lots of situations where button is random. For example, when the table is full, some players have an opportunity to play hands in position for free, or when bargeman456 loses stack, table goes sit out. As soon as bargeman456 rebuys, everyone gets back with random button. The same happens when bargeman456 goes sit out and gets back. Feruell uses that.” 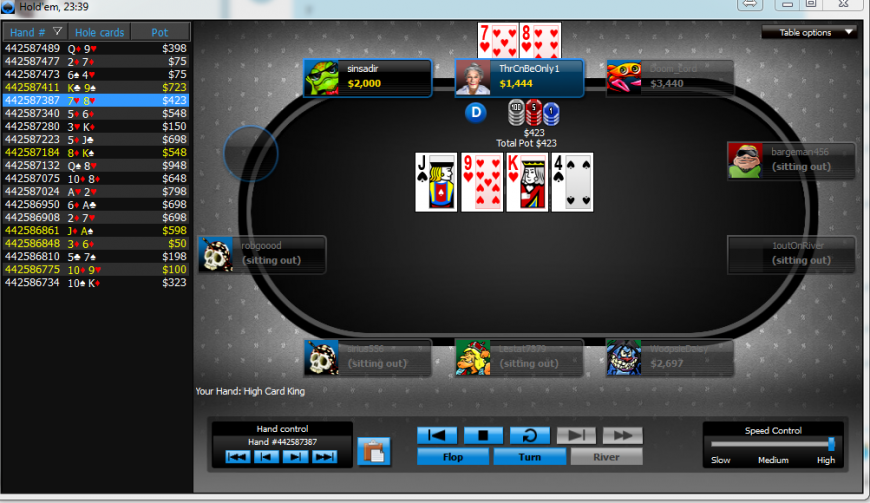 With the help of special script Russian reg abuses “free hands” as much as he can. Someone might think this is insignificant, phew, couple of blinds.

Winrate at high stakes of Limit Hold’em is about 1 BB/100 (2 big blinds at 100 hands. All the players lose money playing from blinds, and this money is a big deal to the total winrate. Avoiding blinds helps increasing winrate by multiple times)!

Sure, there are several additional factors (style of the fishes play and so on), but the message is the same – it increases winrate significantly.

“When fish jumps and switches tables it is OK for everyone to reserve and block good seats beforehand. 3-4 seats at the table where fish goes are occupied before he takes the place. Plus there is a group of scripters (what is under strict restriction on 888).

Why everyone blames me with such behavior of everyone else? Usually I am the strongest of one of the strongest players at the table and play with pleasure. However, should they took me away from the fish with their dirty tricks and the game falls apart every 5 minutes or so, I do what useful for me.

Want some fair play? Let’s discuss principles of behavior everyone sticks to. Blame only me when I’m one of the few who is ready to play with whoever wants is just hypocritical.” The main accuser of Feruell will later denies scripters existence at 888 poker and writes:

“I use script at Stars where it is allowed. In other rooms I use usual table scanner, or look at lobby manually.”

This situation might seem the following for the outside look: they haven’t found the one to blame and they have their sins as well. However, no Russian top regulars were accused of buttoning (with rare exceptions). Feruell uses this way to increases his winrate on the regular basis for many years.

We can look at this at another angle. If Feruell won’t use this tricks, he will not be able to adequately compete with the existing field at this stakes. He is strong, but there are lots of players with the same skill.

And that is not even the worst part. It happens as the room stays aside. They just don’t care. That’s why there are scripters. The room needs to be in charge and stop monkey business. Otherwise there will be no recreational players at all as they are the ones paying for the skipped blinds.

Finally, the comment of one of the live poker players:

“Well, suspicious dealers at gaming flats, funny players from the East screaming: “Why the fudge would you check-raise into me?”. Marked cards by several players with various marks, playing for air with locals getting chips they haven’t’ paid for with hopeless search for money should an outsider fish win… all this pales in comparison with the honesty of online guys”.