We’ll start from the Main Event – there was a lot of interesting stuff.

To start with, there were 55 players from Russia in Main Event, 10% of the field. Only Frenchman had more representatives, but we can count them out as Monaco is practically small France. Total number of players in the Main Event is 564, what is a hundred shy of last year’s number of buy-ins.

We must tell you about final table as it was good enough for any study book! But we’ll tell it later.

Stories of Chen and Astapov

By the beginning of the third day there were just twelve Russian speaking players, and Russian Anatoliy Chen was it Top-10. By the end of the next playing period he was in Top-3 already. He had no ITM previously (although he was participating in EPT tournaments quite often in the past years).

Unfortunately, during Day 4 Chen have left the tournament. He lost almost entire stack in one hand. He overpushed with tens on the flop 8-3-Q (rainbow). Japanese Koichi Nozaki called with jacks and took a huge pot (with it he managed to reach final table).

Something special is also about Belarusian Anton Astapov. During Day 2 he knocked out Daniel Negreanu himself in quite notable hand. Canadian bet on flop and turn of the board T-6-2-J-A (there was flush draw on the flop) and stopped betting on river. 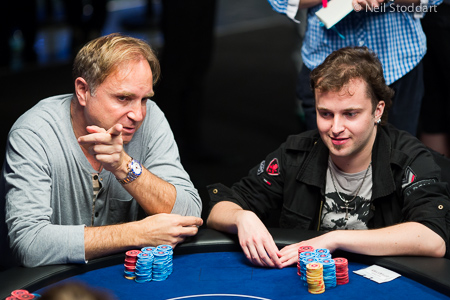 Astapov made the best of the situation and pushed himself.

“Oh no! Why does it have to be this card! – started Negreanu. Wait, maybe you’re bluffing. Flush draw missed, straight draw missed. I need to think.

You’re bluffing, aren’t you? Russians love to bluff. And the spot looks great. Maybe you have A-8s. But you wouldn’t push with it. Well, maybe you would!”

Ole Schemion, Adrian Mateos and Johnny Lodden made to Top-3. The first one is the best player of 10th season of EPT, elite MTT player; the second is WSOP Europe champion; and the third is one of the best players from Norway.

Special interest was caused by Muhyedine Fares from Senegal and  Lebanese Hady El Asmar, they had the biggest stacks in the beginning of final table play.

As it was figured later, 20-year-old Spaniard Adrian Mateos gets the title. He bluffed Johnny Lodden (who was tilting), made to heads up with serious chips deficit and won 15 million chips in one hand! Over 210 buy-ins were made to €25,500 High Roller, that’s a big number. The were lots of players from CIS and only one of them made it to the final day – Andrey Andreev. And he was in the chip lead.

Andreev will be kicked out of the tournament by young Irishman Charlie Carrel.  He pushed leftovers of his stack with K-Jo pre-flop and was called by Carrel with A-K

Young unknown Frenchman who was losing in chips significantly faced Carrel in heads-up which was over in fast time. By the way, Carrel wasn’t too famous till this moment either. He won in Grosvenor UK Poker Tour 2014 and played on final table of на EPT Malta 2015.

According to the words of the winner, big part of his winnings he’ll have to pay to his fellow backers (and he’ll be glad to do it). The young Irishman just travels all over the world for 5 months already.

And he ain’t going to stop.