Despite continuing decrease of earnings of Chinese casinos big cash game in Macau is rolling full speed (well, almost as good as always). Sometimes stacks of players consist of tens of million dollars and there is not enough room for all the chips.

Unreal game in Macau isn’t going anywhere. The best pros in the world together with the most powerful and richest businessman are still there. They don’t talk about it much. Players won’t benefit from it, especially in modern day realities of today’s China: there is big war against corruption – almost everybody is getting tested.

But some info comes through. And here it is.

Total income of Macau decreases 9 months in a row

In February total income of Macau decreased on shocking 48.6% with comparison to the same period last year. And that is despite Chinese New Year celebration. Decreasing trend started to form in the middle of last year, but the main cause for it isn’t state politics but actions of the casinos.

Let’s not split hairs here, it’s a long story. The only thing worth mentioning is that gambling houses lack VIP players – millionaires and multimillionaires from the rest of China. It was a common thing before to come to Macau on special junket tours.

Something like that is common in CIS, but in China there is a whole industry of such thing. Casinos make special room for these clients and get part of what they live.

But recently authorities keep a close eye on junketers and businessmen keep their images low. Just in case anyone wonders where the hell they take $100,000 to bet in baccarat.

It is possible that some of participants of junket tours took part in Big game, but now this is too much.

$20 million in chips on the table

Okay, let’s speak about cash games. One of the most famous “popularizes” of Macau games is super highroller Tom Hall. In one of his posts on 2+2 he writes:

“At some point there were so many chips there was no space for cards. We played two days in a row and rested couple of times for 4 hours”.

During that session Tom Dwan and Alec Torelli were the only professionals at the table. In Big Game pros are rare according to unspoken rules. Are there regs of Big game? Tom Hall speaks:

“Cash games involved 100-150 man played at least once. 10-20 of them play each month, 3-4 play nonstop. There is always different participants, mainly pros and locals (who are playing those on junket tours)” 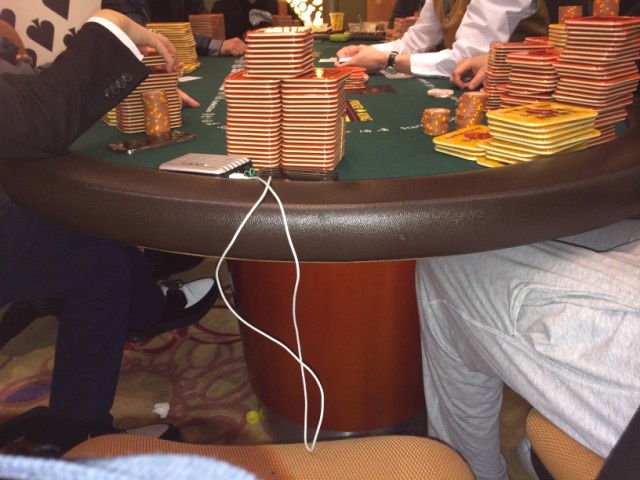 Big game welcomes mainly rich businessman with no experience of play. Pros are usually invited by other professional players who already played in Macau.

Interesting feature of Big game is friendly atmosphere. No tension and everybody is friend to each other or a nice acquaintance at least. Slow roll is not appreciated. Anything from negative poker arsenal is not used. But there are rare exceptions of this, according to tom Hall:

“I remember one of the players pushing and the other thinking for so looong. And then he went to toilet. He was absent for five minutes or so. When he came back he called with nuts. Everybody thought it was a nice joke”.

A nice illustration of what happens in Macau (and inside atmosphere) is this video of cash game in Aussie Millions 2014:

Also insurance is very popular among regs of Big game. Not professionals are playing on their own money so it’s convenient. Junket operators often sell insurance to their clients . And they get nice interest on this operations.

Many famous people of gambling industry are in Macau. I’m talking about Leon Zukernik – the owner of Czech King's Casino. Here is his description of what he saw in the capital of gambling:

In Venetian in Macau in November of 2014 I’ve met my friends from Germany: Philipp Gruissem,  Tobias Reinkemeier, Max Altergott. It was unbelievable”.

“I had pocket tens, opponent from China had aces. Preflop was nothing special, flop 10-4-7 brought something interesting. Turn and river changed nothing, American smile was all over my face. My opponent kept betting, and pot grew till HK$8.9 millions. I won $1 million“.

Sitting in your favorite club, remember that somewhere in Macau millions of dollars are being played in this very moment and their tables are full of chips. Whether this thought is helpful or not, it would mess with your head for sure.